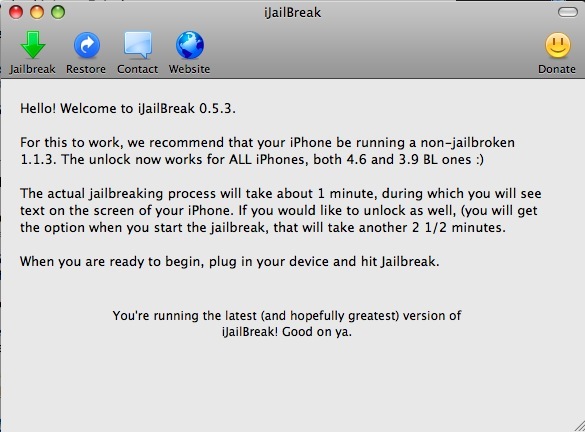 Last month, when i got my iPhone, it took me less than 24 hours to decide I wanted to Jailbreak him (So I could run other Apps, no need to unlock since I am on O2 anyway)

So I did, and sure enough it was great, but then Apple introduced v. 1.1.3 and there was no Jailbreak for it, I decided to upgrade and go back to having no Apps.

But it did not took long for a new jailbreak to show up, and a few weeks back I try to jailbreak my 1.1.3 phone, and sure enough, it was the same old routine, I had to downgrade to 1.1.1, download almost 300MB worth of firmware from the web, etc etc .. the entire process was similar to 1.1.2 jailbreak as described HERE .. certainly allot of work and took 1 – 2 hours to do.

Until today, when I read about iJailBreak .. the program made some bold claims … 1 minute Jailbreak ?, no downgrade needed ?, surely I was reading it wrong ..

So I downloaded it and fired it up

Firth thing one notices is that it actually calls for the phone to have 1.1.3 (preferably) .. cool, so I clicked Jailbreak, the iphone went to a restart, then I saw a bunch of code being processed on the iPhone, less than a minute later the iphone rebooted and … it was Jailbroken .. WHAT ?

No downgrade to 1.1.1, no fiddling with contacts to access the installer URL, no re-installing 1.1.3 .. no downloading of large firmware files, nothing at all, just worked as a “patch” and it was done.