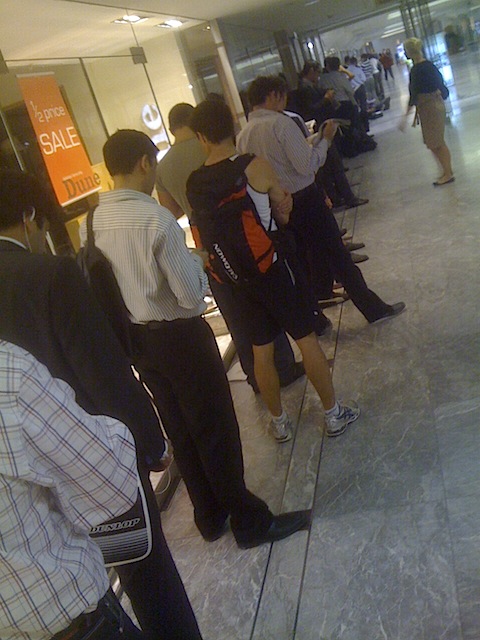 I decided to get an iPhone 4 this morning (launch date for the UK), so I went to Carphone Warehouse in Canary Wharf to queue at 7 AM, the store normally opens at 9, but today they where going to open at 8.

I thought there would be maybe a couple of people there already, buy was I wrong, when I got there this is what I was faced with:

Yes, there was a line of over 40 people already, and within 30 minutes I had perhaps 50 more queuing behind me, they opened shortly after 8 but unfortunately the phones have to be sold with a contract, so each person was taking 15+ minutes to serve, and they where serving 5 people at a time and letting one person inside the store at a time (when somebody would leave), so while the store opened at 8, I did not got served until past 10 !!!

Even worse, they only had 56 iphones, I was number 40-something, and praying they stuck to 1 phone per client policy, when I got my phone, there where about 10 left, but the queue of 200+ people was still going strong… wishful thinking I guess

Either way, over 3 hours later of standing there, I finally got my phone, it’s a beauty, I am now waiting for the carrier to activate it 🙂