When I was a kid living in Portugal, I used to love reading “Disney” comic books, used … nah, I still like them even these days :).

Anyway, one of my favorite comics of all times, was a series of stories published in the late 70’s, early 80’s entitled “Goofy Does History”, on those stories, Goofy played very famous characters such as Leonardo da Vinci, Midas, Marco Polo, etc .. and one of them was “Galileo Galilei” ..

Yep, this exact comic is on my bookcase

I remember that one of the great things about those stories was how for example, at such young age, I learned how Gutenberg published the first book ever, and that that book was the Bible, or that Galilei experimented that two bodies of different mass and weight would fall at the same rate on a vacuum (the “Falling Bodies” theory), these are things I would only hear about many years later in High School, but there I was at the age of 5, and thru comics, I was learning.

A fact that didn’t went unnoticed, so these days, I spend some time looking for those same comics in english, so my children can read them and while having a laught with them, they are also learning.

Anyway, enough nostalgia, our next cartoon episode, was based on my re-colection of the Goofy Galilei episode, where he tests his Falling Bodies theory by asking a heavyset woman and her puny husband to leap from the tower of Pisa into an old mattress to test his theory that they would both fall at the same time (hey, it was a cartoon book after all).

On this episode, we illustrate that sometimes you just feel like trowing the deadbeat customer’s server’s from the 10th floor, but hey, if you have to do it, might as well make a science project out of it and test the great master’s (Galilei) theory.

The sketch was done a big on a hurry, I had the idea on my mind and needed to give it to Paulo @ Yellowicon/Iconbase within 5 minutes so he could do the final Art; To illustrate how on a hurry we were, I had to capture the sketch on my MacBook Pro Webcam since I had no scanner around and there was no time to wait until I got back home. 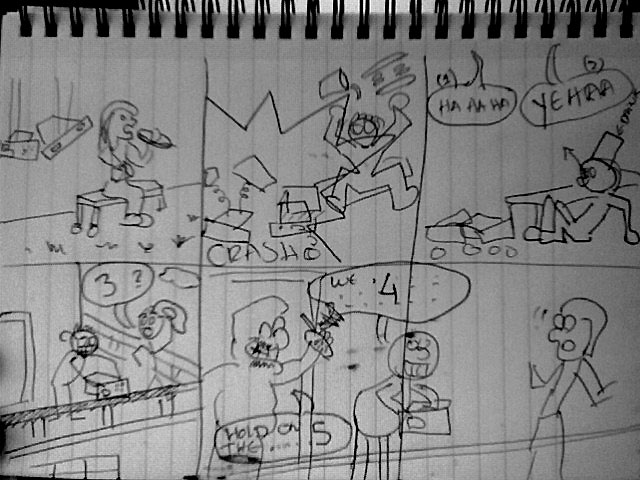 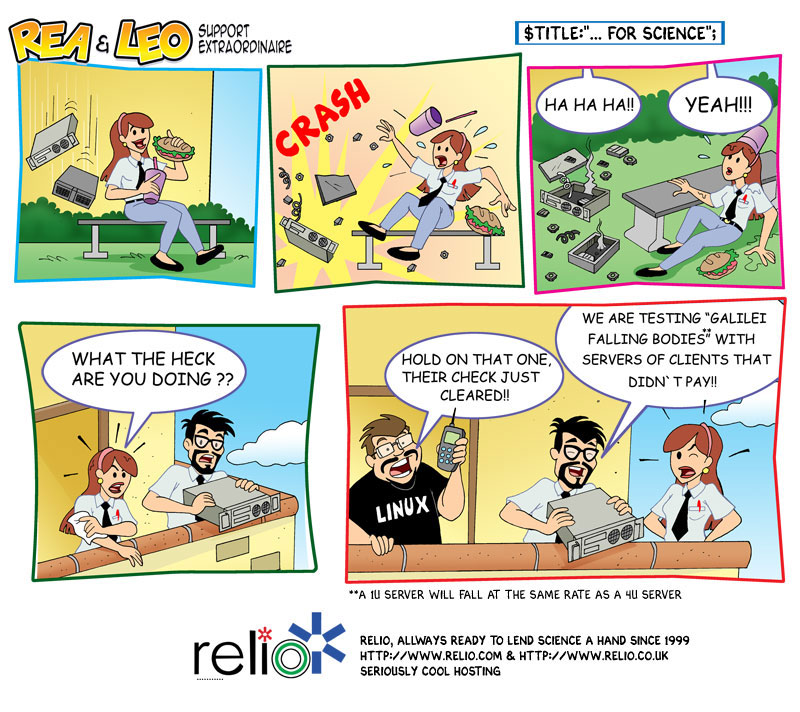 In the end, I love the result, it’s a funny Gag, and I am sure Relio visitors and other friends will have a laugh at it , and who knows, a few might do a google on Galilei and learn something from it (especially those who wont have a clue what his theory was).