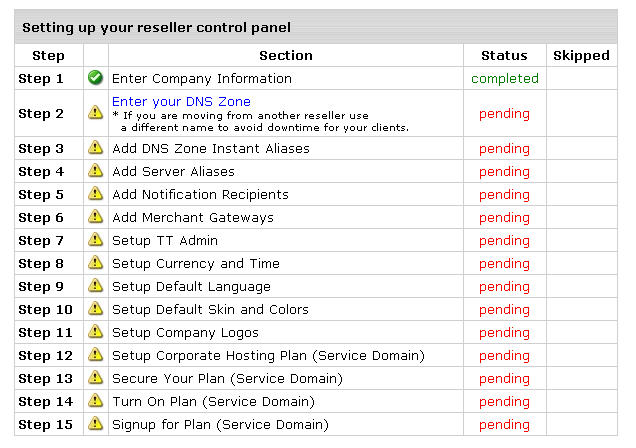 I Have been testing a new script that Jeff (hspheretemplates.com) is creating for H-Sphere.

Basically it’s a Reseller Walkthrough .. the idea is, the reseller get their account, then then login and immediately are presented with a screen that highlights 15 steps they need to finish.

Until all steps are completed, thats the screen they get every time they log into their Admin account, the Walkthrough also has some tooltips and will link you to the right page to perform the step in line, it will also force you to d the steps in order .. as some later steps depend on earlier ones to be complete.
There are a few bugs, and I have sent jeff a list, but overall, it’s 95% there, and it’s better than the alternative, which is a html file describing what to do, that most people seem to have a problem with.

Our resellers at Relio are now using it, and they seem to love it .. I’m quite happy, because on the next H-Sphere 2.5.1 we will have the ability to not need to create an “Admin user” anymore (resellers got confused, they had a regular user and an admin user), and the ability for Resellers to “Inherit” plans from the Admin (Called Markup Plans) .. instead of having to create their owns from scratch .. this coupled with this plug-in will make reseller’s life in h-sphere so much easier.