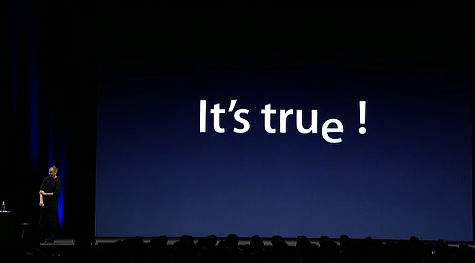 A couple of days ago I read a news article that stated Apple was to migrate his machines to the Intel platform, steering away from the PowerPC in favor of x86.

I personally prompted it as nonsense, true that IBM has not been able to produce a 3 Ghz chip yet, but would Apple really go as far as moving to Intel ?, well the truth would be known at the WWDC conference, so instead of speculating, I decided just to wait (but deep inside, kept dismissing it as a silly rumor)

Well, yesterday Steve Jobs put an end to the rumor, and made a fact, Apple is switching to the Intel processors.

My initial reaction was of utterly disbelief .. why would Apple abandon the PowerPC .. and join the Intel league .. and worst, I just invested on a very expensive PowerMac Dual 2.5Ghz .. what about my investment ?

I moved to Apple at the end of last month because I was tired of the PC world, the constant uncertainty, the never being able to have a machine for over 1 month before it’s outdated, the crashes, the bugs, the virus, the people, the junk… With the Apple machine I felt more at ease .. here was a platform that was not changing every hour, the ROI was much better than a PC, and the value of a used MAC after a couple of years of use was still quite large, so it was OK to invest on a nice MAC .. you probably get 50%+ of your initial investment after a few years of use, how many PC’s can say that ?

Plus it’s a “niche” market .. only 3-5% (depends who you ask) of computer users use it, so not allot of virus and spyware are floating around for it, besides, it makes you feel part of a exclusive club, away form all the other junk out there.

But now, will we all be PC’s ? just running a different flavor of an OS .. no different than Windows and Linux … what a disappointment I tough.

One day later, and I am starting to see it clearly now, this move HAD to happen, the truth is, IBM was simply unable to keep up, the fastest MAC you can get is 2.7Ghz, the 2.5 has been out for a while now, IBM had caught up with the 2.5 (almost), but then it stagnated.

Also, IBM has been having problems proving Apple with enough processors, and worst, with a G5 for laptops .. I guess Apple just decided it was time to move on, before they were left in the dust.

A few weeks back I was commenting with a friend of mine the exact thing … Apple was stagnant, speeds were not increasing, and no G5 laptop on the way .. it reminded me of a few years back, just before they moved from Motorola to IBM .. their speeds were getting to really be lagging compared to the PC world .. and I wondered what Apple was going to do about it.. well, the answer is here .. isn’t it 🙂

Hopefully we will still have the same great Apple machines we are used to, but the processing power, the number cruncher will just happen to be from Intel … My hope is that we see a MAC using an Intel processor, and not a PC running OSX.

As for my investment, i guess mine just became even better, when the new Intel’s come out, allot of people will be weary of the change, and looking for high end G5’s like mine, which will still be valuable, a good example of that is the price a high end G4 commands these days, just because it can boot OS9… for those who wont change 😉 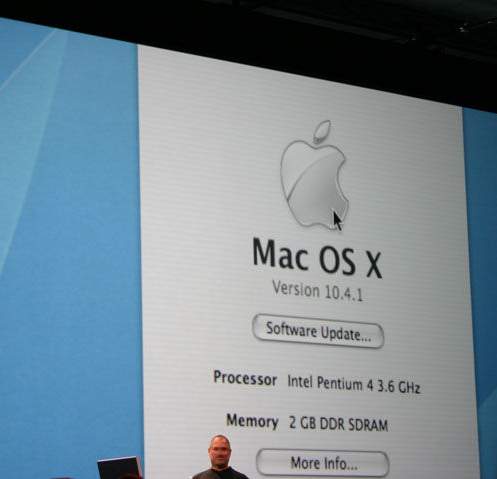 In the end, the prospect of a Dual Xeon 4.Ghz+ running OSX has won me over … by the end of 2006 I’ll sell the G5 and join in to the next chapter … hopefully it will be a good one.