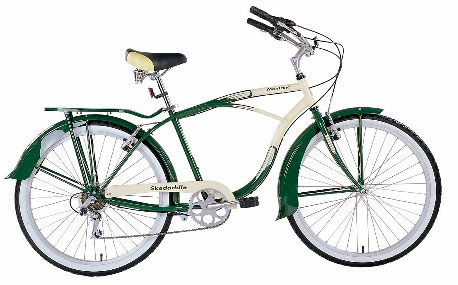 Today I started a new chapter on what I hope to be a healthier lifestyle.

Since I got married for the second time in 2000, and shortly after gave up smoking, that I started to put on weight, eventually I stopped “enlarging” around 2003, but now that my kids are growing, I don’t want them to see me as a fat blob and think it’s ok, so I decided to get on a routine, more healthy eating habits and to bike the 1.7 miles to work and back every day.

Now, of course this is England, so it means .. I got a short window of time of when I can do it, but hopefully I can make the most of it.

Amazingly enough, it took me just 13 minutes this morning to bike the distance to work, I arrived with my legs feeling like bricks and my lungs were feeling as if I had smoke a pack of cigarettes one one go, but still, it was quite easier than I tough.

The bike I bought is called a “Skedaddle Montana Cruiser” .. funny story there also, I had seen a bike like this for sale used on ebay, but was missing the rear rack, so I decided to look who the manufacturer was and try to get a new one, after searching for a week and calling every major bike shop in the UK I finally found out the manufacturer of these bikes was called “Cycle Citi” and their warehouse and offices went up in flames last year.

yeah, it’s funky looking, thats why I love it

Decided to dig a bit more and eventually I was able to find their new site and phone, after a bit of sweet talking on the phone, I managed to convince them to sell me one of the bikes they had salvage from the fire (they put some of their stock that didn’t burn on a warehouse in Wales).

I drove tot he warehouse and was quite shocked, allot of the boxes were pitch black from the ashes of the fire, but luckily the bike I wanted was on a separate section that was undamaged.

So long story short, I now no longer need to drive 45-60 minutes to Manchester every day, I can just take a leisurely stroll on a fairly flat route to work, and try t get a little bit in shape in the process .. I dont know what I will do in the winter, I will try a raincoat .. see how it works 🙂