So, I have now had the Prowler for 2 months, bought it almost 6 months ago but took a while to receive it, in my (short) experience, what have I learned so far ?

– The prowler is a gas guzzler

No if or buts about it, this thing can drink, granted if you live in an area where you will be driving it on long stretches of road, it’s better, but for the city !, it will require quite a bit of gas, this is not a car for London driving and it’s constant stop and go.

– The engine is NOT underpowered

By all means somebody explain to me who in their right mind thinks this V6 should have been bigger, it accelerates quite nicely and nobody in their right mind would go much into triple digits on this car, it does start to get real testing at 110+mhz, so why have an engine that can do 200mph when the car can’t ? only for the sound of the V8 .. not for the power of it!

– You MUST be a good/responsible driver

I would not advise a Prowler for novice drivers, this car has limited visibility and at times feels the back wheels want to overtake the front if you have bad road traction, an experienced drivers will know how to drive, park and manoeuvre this car, an inexperience one will hit every curbing and loose traction by speeding up at the wrong turn.

Doesn’t matter if you decided to cruise the boulevard or simply stopped at the shop for a pint of Milk, turn around and there will ALWAYS be somebody taking a picture of the car, folks simply can’t get enough of it!

– People are very respectful of the Car

If people want a picture and they seem me coming out of the car, they will politely ask iff they can snap a photo, I have also seen instances where people have parked next to it, looked over and then pull out so they can park another foot or more away from it, afraid to hit it with the door, this is not like a Lambo or a Porsche, where people thing the owner must be a cock, people genuinely care for this car.

People just smile at it, it conjures a feeling of happiness, I never saw anybody look at it and have that face of “what is this s****” .. old and new they all smile, I get a feeling people actually are happy for you for driving such a cool car, instead of jealous or annoyed by it.

What else is to say, boy or girl, they just go mental … it’s my favourite sighting ever !

I have lost count at how many times I have been asked to rev the engine while I’m stopped at traffic lights .. no thank you, I’m not 18 !

– Everybody thinks it costs allot more than it does

Anybody that speaks to me that risks asking for price always looks confused when I say the price-range … nobody who is not in the know ever expected this car to be below 100k, so I actually stopped saying the price, I just say “it was that or a Porsche”

This is not a car to speed down the highway at 100Mph, this is a bonafide cruiser, best feeling ever is to drive it slow somewhere nice, enjoying the sound it makes and the feeling it gives.

Every single time !!!, I always manage to mess something on it, a ding, a scratch or something else … so I will stop messing with it !!

Time and time again I find myself unable to drive normally because of the people on the road, I lost count of how many times I wish to overtake a slow driver in front of me, just to be blocked by the driver on the side of me that won’t speed up because he wants to stay on my side and admire the car, drives me nuts !!, yes it’s beautiful … now MOVE !!

Thats the positive side, if I am on traffic and I wish to change lanes, as soon as I hit my indicator, the people on the other side always let me in right away, people love to be nice to your car 🙂

– Filling it up with Gas is also at times annoying

Gosh, I know the whole “turn the gaz nozzle to 10:00”, but every time I go fill it up the gas pump just keeps on shutting down, you rotate it right/left and every position in between, but it’s still quite a PITA.

– I get butterflies every time

Not sure this feeling will ever go away, every single time I sit on the driver’s seat, I get butterflies in my stomach, it’s such a cool car to drive

– Everybody is your new friend

People stop me everywhere I go, they just want to say Hi, and speak about the car, people who usually would not give you the time of the day, all of the sudden they want to know you .. and the car, if you are the shy type, this is not a car for you!

Yeah, everybody thinks this is a KIT car, something you built yourself, they get quite surprised when you explain it’s not, they also don’t have a clue who “Plymouth” is .. you have to explain the whole Chrysler connection.

I find the easy to clean, no real weird angles to mop, and all very accessible, even the wheels (standard) are nice and big with no small nooks to trap dirt, very easy to keep clean indeed

– I am scared straight of scratching the flame paint job

While having a cool custom paint job is awesome, I live in fear of messing it up with a scratch, it would be hell to repair properly, but you only live once and I try to minimize my worry, but it’s a concern, don’t do custom flames unless you can live with the risk!

It’s great to have something that gives you pleasure, but it’s even greater to have something that gives those close to you lots of enjoyment as well, when she enters the car she always makes sure to fix her hair and put on sunglasses, she knows there will be loads of pictures taken, she says it really makes her feel like she is a star with all the people looking at us … I don’t have the heart to tell her it’s the car, not her, let her have her moment !

– You can go crazy on customising it

While my car was already heavily customised by the previous owner, I haven’t stopped, and doubt it will ever come to a point I will say “ok, I’m done” … if you are they type that likes customising, this car seems to always have something else you can change, it’s quite fun (albeit expensive)

– Do paint the interior bits

I had the radio console, door opener bezel, shifter bezel and tach painted in the colour of the car, and I believe that makes a major difference, feels like it should have been from factory and really livens up the interior. 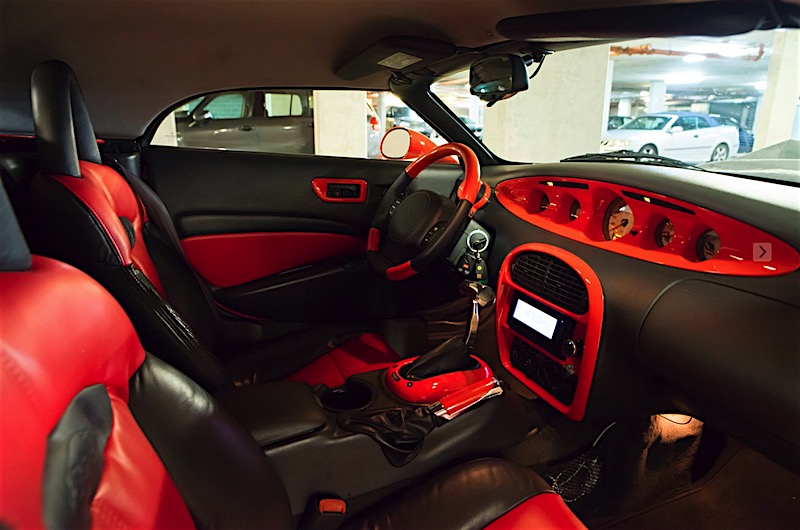 And to end .. it’s just FUN, puts a big smile on your face and you know you driving something truly special 🙂

… Granted I have not yet gone trough any problems or maintenance woes, replaced the driver’s side window motor and the fuel pump with Tom Mills products, other than that so far so good, upkeep over the next few years will determine how easy it is to maintain, but it’s a labour of love and it’s not like maintaining an every day car, with this one you don’t actually mind.

9 thoughts on “2 months Prowler ownership … what have I learned ?”