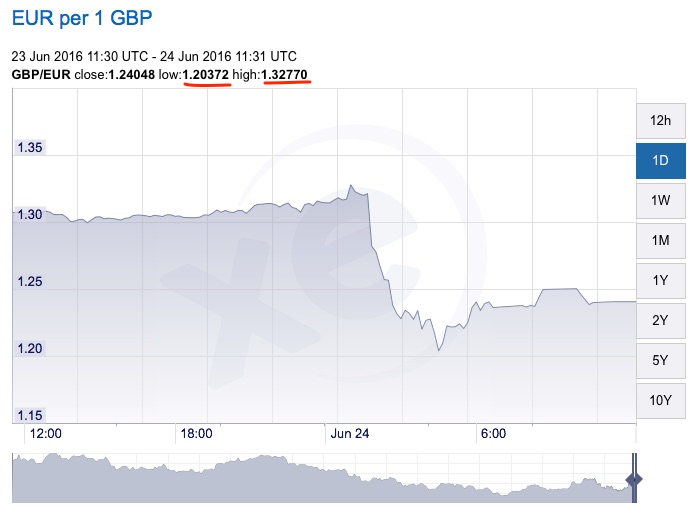 So the UK people have voted to leave the EU

I am sure that most people who did so have no idea of the impact of such a decision will have on them, but thats their problem, I am only considering the impact this will have on my own day to day.

And the first negative impact was easy to predict, the GBP is taking a beating, since yesterday it went down as much as 10% vs the Euro, having recovered some during the day, but it’s all very uncertain now, the next few days will show the real outcome on the FX trade, but for now, it’s not good.

I’m hoping this will stabilise as the markets realise that nothing will happen overnight, for people such as myself with GBP incomes but allot of overheads being paid out in USD and Euro .. it’s a disaster right now.

I can only imagine how hard this is being of those ex-pats who are living abroad also, first their UK income/retirement/etc is now worth less, second if indeed the UK decides to close the drawbridge, it’s a two way street, what will the other countries do about those brits living abroad ?, it’s all speculative at the moment and to be fair it’d doubtful anything radical would happen, but still, for those living it, it’s scary !