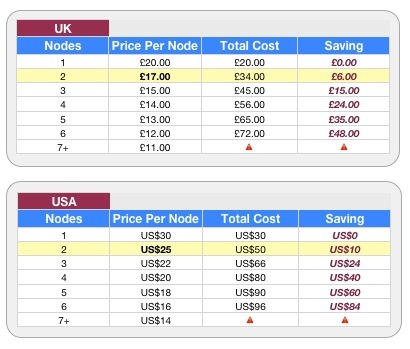 A couple of weeks ago, we announced the final pricing for VPS.NET .. this was not an easy exercise either, it took allot of work and study to determine what prices we had to set that where both attractive to customers while at the same time ensuring our product was profitable.

But it seems that for some people we might have as well put a few prices on a cork-board and trow darts at it, where it landed .. that was the price.

It’s not that simple, when pricing a product of this magnitude (a Cloud) one needs first to gather all the costs associated with deploying and maintaining the product, then you need to account for the growth period (remember, one will deploy a cloud system that costed millions of dollars to setup, but you will have 0 clients that first day .. with $0 revenue incoming), it takes months, sometimes years, to recuperate initial costs, while at the same time you have staff and ongoing expenses that ned to be meet as well.

Not, if you compare the traditional VPS market, a traditional VPS provider will buy or lease a server, costing a few hundred dollars to a few thousand and sell out “chunks” of that server, very minimal initial capex and usually they will break even within weeks.

How in the world then do people expect Cloud computing to be priced identical to standard VPS ?, it’s simple .. in general people dont !, those who cannot afford it do !.

It seems that we have now a new generation of people that believe if there is something in the internet that they cannot afford it, then the price is wrong, sorry, but thats not the case, sometimes your budget only really allows for mediocre.

I have instead focused on asking those people who “actually” signed up and their reaction could not be any more different, they love the product and they believe (like us) the pricing is actually it’ strongest point, the initial cost these days for anybody to get into a cloud setup is the hundreds of dollars per month, we reduced it to $30 !!!.

My team and I get demoralized when we read of people blasting us because we dont match the price of a traditional VPS setup, and for a while we did try to see if the math added up, could be be any cheaper ?, no, it does not add up, why would we sell at a loss ?, we are competitively priced and will stop dwelling on what a few leeches are screaming about and concentrate on providing a great product for those people who see the real value of our offering.

I too sometimes browse ebay for that elusive DB9 for a VW Bug price … but it’s just not going to happen.