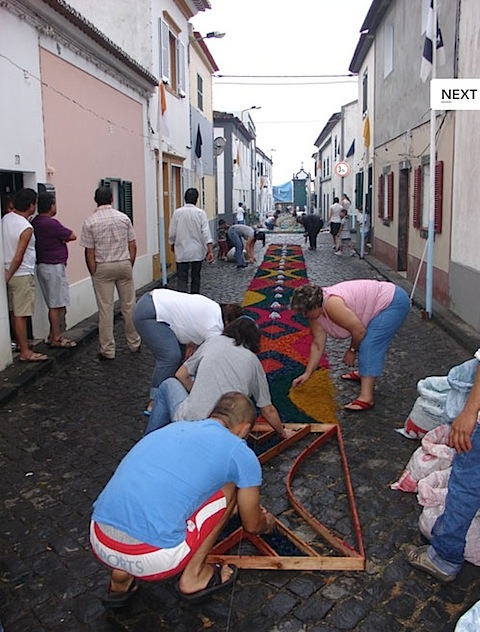 I was feeling a bit nostalgic today, missing the goo old days when I used to live in the Azores, most precisely, a little village called “Fenais da Luz”, located in the north of the Sao Miguel Island.

Now, I was there about 4 years ago, and after an absence of over 10 years, I realized then, that what I missed was a bygone era, the place and people are not the same, everybody changes and people move on and away, but still .. it was a nice place as always, but it no longer was “my” place, it now belonged to a new generation, I always felt like a visit in my own land.

That did not stop me from googling the village today, I found it now has a new website dedicated to the local village county http://www.fenaisdaluz.com .. and even better, I found pictures 🙂

I was even able to find one that has my house on it (my mother lives on it) .. in the picture you can see people creating flower carpets for a religious march that happens every year, but I was surprised by the fact that, my house (the pink one on the left, only able to see about 1/2 of it’s front), has 3 people by the door … unfortunately .. I dont recognize a single one .. :p